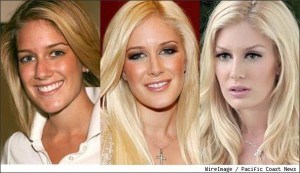 Security agents spend hours every day scrutinizing passports, passport cards, and other photo documentation at airports, ports, and border crossings. There have been cases where people who underwent plastic surgery no longer resemble their photo IDs, and some security agents are starting to recommend that people seek new IDs as soon as they’ve healed from a surgical procedure.

When border or security agents cannot match a traveler or visitor to the ID they’re provided, they must seek proof that this is, in fact, the same person. Customs agents say some people go as far as to bring pictures of the surgery and the healing process to prove they are the picture in the original photo. Without any proof, they’re often forced to deny entry.

At China’s Gongbei Port, two women underwent facial plastic surgeries to look more like their favorite movie star. When they presented their passports to the police, the police had a hard time matching their new face with the image on the passport. While the women worked to prove they were the same people, it slowed the border crossing down.

A woman in Shanghai underwent several facial surgeries in hopes of landing a job. When planning a trip to Hong Kong, she was shocked when she was denied a visa. Officers found no similarities between her old face and her new face.

In 2009, a group of women left China to go to South Korea for less expensive cosmetic surgeries. On their return, they no longer resembled the pictures in their passports. They were allowed back in, but only after officers scrutinized their photos with their new face to compare features that hadn’t been altered during the surgeries.

Surgeries that Can Make You Look Different From Your ID

One cosmetic procedure isn’t going to radically change your appearance. If you go in for a number of procedures at the same time, however, it can make you look like a new person, especially if you pair the surgeries with a new haircut or color.

One of the best known cases in Hollywood occurred when The Hills star Heidi Montag completely changed her looks by undergoing 10 hours of plastic surgery and then lightened her hair. Changes to her face included Botox injections, a browlift, chin reduction, fat injections in the cheeks, neck liposuction, otoplasty, and rhinoplasty. The star ended up looking nothing like her former self.

A rhinoplasty can change the shape and size of your nose, and even small changes can dramatically affect your overall appearance, case in point with actress Jennifer Grey’s nose job which left her nearly unrecognizable. If you pair it with an eyelid lift, facelift, or browlift, you’ll look even more different. Add in implants in the cheeks or chin, and it can become very difficult for border officials to tell if you’re the same person.

What You Should Do

If you undergo facial cosmetic surgery that drastically alters your appearance, officials recommend immediately applying for a new ID before traveling or entering a high-security area. It may be hard for you to tell just how different you look, so listen to your friends and family. If they say they have a hard time recognizing you, get a new ID.

If you must travel before getting a new ID, ask your plastic surgeon for a letter stating you underwent plastic surgery. Photos of yourself before, during, and after the procedure can also help prove your case.

The best plastic surgeon is one who will perform cosmetic procedures without making you look like a brand new person but rather a new and improved version of yourself. Plastic surgeries have risks, so it’s important to keep those risks in mind and avoid getting too much work done. Read the Guide to Safe Plastic Surgery: Patient Safety from the American Society of Plastic Surgeons first and then call a board certified doctor to discuss if the work you want done is a good idea.

Dr. Sheldon Kabaker is a facial plastic surgeon in Oakland, California. He is happy to show before and after pictures of his patients and walk you through the procedures that can enhance your facial qualities. To schedule a consultation, call the California plastic surgeon at (415) 379-9015.